While I’m not a major fan of Cher or Nicholas Cage, I adore this movie.  I love how no nonsense Loretta is and I think she’s perfect to knock Ronnie out of his stupor.  She calls him out on his fear of his own passion and ever loving again and gets him to stop feeling sorry for himself. I love the dynamic between the older couples. Poor Rose knows her husband is running around on her because of a midlife crisis but doesn’t know what to do about it, yet even when she catches the eye of another man she keeps it together, stands her ground and insists Cosmo dump the floozy.  Of course at this point Cosmo comes to his own realization that while Mona makes him feel strong and virile, she doesn’t have the class and sophistication of his wife and becomes an embarrassment for him at the opera.  And who could forget the sweet and adorable Rita and Ray Cappomaggi!  Even the doddering old man, who takes his hoard of dogs to visit his wife’s grave every day, can see the chaos unfolding within the family but feels powerless to do anything about it.  It’s a sweet story with some great characters and if you haven’t seen it yet I highly recommend it!

Cat on a Hot Tin Roof

I love Elizabeth Taylor and wanted to marry Paul Newman.  I even cried when the man died a few years ago.  He was such a nice guy who adored his wife, a great actor and philanthropist and a man’s man. Even in old age, the dude was hot!  Anyway, in this movie Paul Newman is not such a nice guy.  He’s an alcoholic and former football star named Brick who despises his wife, Maggie.  The whole family is at the home of the patriarch, Big Daddy, for his birthday and to wait for the medical report that determines whether or not the old man is dying of colon cancer.  In anticipation that the news is bad, the older brother, his nasty bitch of a wife and their brood of spoiled brats suck up to Big Mama like a Dyson vacuum while throwing Brick and Maggie under the bus for his alcoholism and her inability to produce children.  Again, another great story with fantastic characters and a terrific cast.  Best of all, Paul Newman has his shirt off for most of it.  RAWR!

Another Paul Newman movie only this time he stars opposite, Joanne Woodward, his wife in real life. This time Paul plays Ben Quick, a drifter mistakenly known to be a fire starter and is often chased out of town whenever something caught fire in town.  The latest town he hits is owned by another Southern blowhard “Big Daddy” who seems to take special pleasure in tormenting his children.  His daughter, Clara, is a school teacher who’s growing old waiting for her longtime beau and southern dandy to pop the question.  Unfortunately the man is hopelessly wrapped around his mother’s finger and when it becomes clear that his daughter is never going to walk down the aisle, Big Daddy insists that Ben marry her.  Paul Newman isn’t nearly as shirtless in this movie but it’s still worth watching 😉

Isn’t that a thing of beauty?

I have always been a tremendous fan of Spencer Tracy and Katherine Hepburn and seeing them in movies together just makes me giddy! Their chemistry is just incredible and you can’t go wrong watching any of them.  However, of all their movies they’ve done both apart and together, this movie is my all time favorite.  She is an incredibly smart woman who works in the research department of a major television network in New York City.  The photos and location of the building they use in the movie hint that it’s supposed to be NBC but for legal reasons they don’t actually say it.  He is an efficiency expert who basically invented the computer and is visiting to see the network’s boss about making the departments more efficient.  Of course the boss wants it to be hush hush because there’s a big merger coming up and if word got out it could affect stocks… or something.  Any time a movie uses wall street lingo it just sails right over my head.  This is why The Secret of My Success and Trading Places get a pass from me because all I understand at the end is that the good guys won, the bad guys lost and I suspect thousands of people still ended up losing their jobs :-p

Anyway, despite the fact the network lady is also growing old waiting for her network executive boyfriend and department head to propose, she and the efficiency expert get on like a house on fire and the dynamic of their relationship, along with the way the movie ends, just makes you sigh and feel all warm and fuzzy. 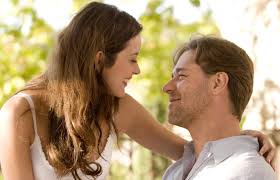 This movie just hits all the right buttons for me.  You’ve got beautiful scenery, a story of redemption, the clumsy meet cute between the pompous self absorbed and reckless hero and the beautiful feisty heroine, and a great soundtrack.  The story and characters are cute but I mostly like to gaze at the scenery and listen to the music.  Still, this is one of my favorite movies to get away from it all.

I read everything from sci-fi/fantasy, romance, historic fiction and sometimes even mystery.  I like a well written book and a good story with characters I could fall in love with and love to hate.  Yes, I am a fan of the Harry Potter books and cried like a baby reading books 6 and 7.  I was a Tolkien fan before it was cool thanks to my dad who passed his books on to me as a child and also introduced me to Frank L. Baum and C.S. Lewis.  These men, along with David Eddings, developed my love for the fantasy novel at a young age.  Having been an avid reader since I was 3 years old, it was only in recent years that I turned to the romance novel.  I had been roaming the bookstores and libraries feeling bored and unfulfilled because it felt as if I had read everything out there and now books and story lines were starting to repeat themselves.  I wanted something fresh and new but I had never even considered picking up a romance novel because I’d always considered them to be cheap tawdry bodice rippers not worth the paper they were printed on.  Yes, I know, shame on me and my prejudices.  I grabbed a handful of books featuring brawny highlanders, forbidden lords and rogues and swooning maidens in peril and started to read.  Now granted not all the books I’d picked up were gems but most of them weren’t half bad.  I found myself intrigued by the stories, rooting for the characters and of course getting all hot and bothered during the steamy love scenes 😉  I realized I’d found the new reading experience I was looking for and dove in.  After a few years I felt like I had the formula and general gist of how the books worked and began writing stories myself.  I had been writing sci-fi fantasy from the age of 7 and welcomed the challenge of working with a new genre.  Eventually I picked up a storyline I had developed as a child with the intention of publishing it as a fantasy series but had never truly been able to get it to work.  Once I added the romance angle, the story sprang to life again!

I am a book thrower, however.  I have been known to fling terrible books with such vehemence that I’ve dented and busted through a few walls in my lifetime.  I tell my husband that this is probably why I’m so good at spackling and not moving around for countless military transfers over the years. There is no specific genre that takes flight in my house more than others, though.  Whatever the genre, I cherish all good stories and writing that keeps me at the edge of my seat and I am an equal opportunity flinger.

My husband and best friend of 18 years

My three crazy and lovable dogs

The smell of the air just before a summer thunderstorm

The sound of waves crashing against the shore

A nice glass of wine

A strong hug from a loved one

A shirtless Paul Newman.  I mean, just look at that!  Sigh…