Like many of you, I am very passionate about my reading. I love getting lost in a book and yes when a really good book is at an end I do suddenly feel lost. I also have a nasty habit of bouncing a book off the wall or floor in disgust if it’s badly written or the plot or characters are annoying, make no sense or aggravate the crap out of me. I like searching for bad book reviews (hoping to never receive one myself but I know it will happen some day) because I like knowing what it is that drives other readers bonkers and knowing I’m not the only book throwing fool on the planet!

It seems romance novels are especially ripe with errors so bad they’re almost funny from ridiculous covers to dialogue and descriptions that range from medical textbook terminology to just plain weird. Recently I found some opening lines of romance novels that are just too damn funny not to share:

1. Beatrice was on him like a piranha on a corn dog.
2.…then he kissed her, like a butterfly kisses the windshield of a Porsche on the Autobahn.
3. With his broad shoulders and slim waist, he was a yield sign — yet she could NOT!
4. Her sun-glazed back formed a golden arch as he moved his face toward her happy meal.
5. With each breath, her chest heaved like a bulimic after Thanksgiving dinner.
6. Her embrace made his manhood swell like week-old roadkill on hot asphalt in the Georgia sun.
7. Her petticoats dropped to the ground, rustling like a cockroach in a sugar bowl.

I’ve also been noticing a couple of trends within the romance genre, and apparently I’m not the only one, that has me a bit disturbed. Now I know that historically there are women who fall for the “bad boy.” I get how alluring a rough and rugged hero that exhibits mystery and danger can be, I really do, but let’s be honest. Most of the actions a hero gets up to in many romance stories, be it book or movie, tiptoe on the line of psycho stalker and would result jail time, accidental death, hospitalization or a restraining order in real life but does the hero really have to be an abusive rapist too? I’m probably going to get a lot of flack about this but I am not, nor have I ever been a fan of Twilight or 50 Shades of Grey. When I picked them up in the bookstore to see what the hype was about, well let’s just say I put them back on the shelf after reading a few passages and walked away for the sake of my walls.  These are large and heavy books after all and it would seriously put my spackling skills in question trying to repair that damage! Bypassing the incessant writing style and heroines so insipid and annoying you have to suppress the urge to go Jack Torrance on them (not that they would mind!), the heroes of these stories are complete assholes! Why women are fantasizing about immature possessive misogynists who in real life they would be telling their friends to dump and run I’ll never understand!

That’s right, it’s charming that I break into your house while you’re in the shower after an altercation.

As bad as these books are, they’re spawning even worst copycats where the characters only seem to become meaner, dumber and more clingy and useless with each retelling of the story. Personally, I like my heroes to actually BE heroes! I like to read about a man who, whether he’s a criminal, rake, or is rough around the edges because he’s had a hard life or went through something that royally screwed him up sometime in the past, is able to keep it together and do right by the heroine. My mother was a huge fan of General Hospital when I was a kid and even then I remember and understood her rage at seeing Laura making doe eyes at the man who raped her as she stands across from him AS HIS BRIDE! I’m sorry, I don’t care how sorry the “hero” is for raping the heroine, HEROES DON’T RAPE WOMEN! They just don’t!  Why would I want to read a supposed love story about a rapist and his victim? That’s not romance, it’s Stockholm Syndrome! While I get that the romance genre is about fantasy, I just can’t understand how the depiction of domestic violence and/or a violent act such as rape, which is not an act of love or lust but of power, can be successful fodder for a romance novel or storyline? 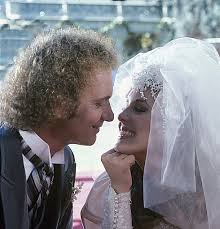 Aw, I can still smell the chloroform you used before dragging me into that ditch!

I also like to read about heroines with a bit of sense. Granted in order for the usual instances of miscommunication that tend to spin these stories along to happen at least one or both parties have to be a bit clueless but one thing that drives me insane is when the heroine is dumber than a box of hair and seems completely incapable of staying out of trouble. Sure, having the hero come to the aid of the heroine when her life is in danger is romantic and wonderful and I have absolutely no qualms about that but I once read a book where the heroine had to be rescued ON NEARLY EVERY PAGE! Penelope Pitstop had nothing on this chick! I mean she was either so incredibly stupid that  I was witnessing Darwin’s Theory in action or she had to be doing it on purpose. I never got to find out because that particular book took wing by the fifth calamity. I almost got the feeling that the writer grew to hate the heroine as she wrote the book and just wanted the bitch dead.

Luckily, there are some fantastic romance novels out there written by men and women who get it and I’m starting to be able to figure out which books are worthy of my attention and which books are just a waste of ink! So I save myself some grief and aggravation although once in a blue moon I will purposely search for a groaningly bad novel for a laugh. If you’ve never done this you should. I once picked up a book that looked and sounded just god awful but to my surprise found myself engrossed in a well written story with lovable characters and a villain I loved to hate.